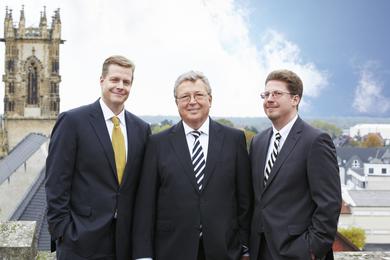 Oelde. A generational change took place at the helm of HAVER & BOECKER in Oelde, Germany on January 1, 2014. Florian Festge (39) and Dr. Fabian Festge (36) took over responsibility for the management of the Machinery Division from their father, Dr. Reinhold Festge, who has taken over the position of president at the Verband Deutscher Maschinen- und Anlagenbau (Association of German Machinery and Plant Manufacturers) for the next three years. He will continue to be available to his sons for advising on matters mainly related to business development.

Florian Festge has been working for the HAVER Group for 13 years. After completing his business administration studies in 2001, he took a management position at the Canadian subsidiary company W.S. TYLER in St. Catharines, Ontario. He was then managing director from 2005 until his return to Oelde last summer.

After completing studies in business administration and receiving a doctorate degree, Dr. Fabian Festge was employed by Messe München for a period of two years before moving to HAVER & BOECKER in 2008. He was then managing director of the newly founded subsidiary company HAVER IBAU INDIA in Vadodara from 2009 to the spring of 2013.

Florian Festge and Dr. Fabian Festge look forward to their new responsibilities and both agree: “We do not wish to work for any other company in the world. At HAVER & BOECKER we have a company culture that is to be maintained and broadened.”

January 1, 2014, Florian Festge joined as a personally liable managing partner in the OHG general partnership along with Dr. Reinhold Festge (68) and Walter Haver (61)